Major League Soccer was founded on December 7, 1993. This league belongs to the country United States. The MLS comes under the confederation CONCACAF. There are 2 confederations for MLS they are Eastern Conference and Western Conference. The 22 teams of MLS are divided into 2 conferences each conference has 11 teams. Each team of MLS plays 34 games during the season.

In MLS the team with best record is awarded the Supporter’s Shield. The teams of MLS also play in other domestic competitions against teams from other divisions in the U.S. Open cup and Canadian Championship. The teams of MLS also compete against continental rivals in the CONCACAF Champions League. The current MLS cup tile champions are Seattle Sonders FC. The current Supporters’ Shield winner of MLS is Toronto FC. The most MLS cups are gained by the team LA Galaxy. The most MLS Supporter’s Shield winners are D.C. United and LA Galaxy teams.

The MLS founded in 1993 as part of the United States and it won the successful bid to host the 1994 FIFA World Cup. The first season of MLS took place in the year 1996 with ten teams. In the first few years of MLS origin, it faced some financial and operational struggles. In early years the MLS lost millions of dollars and teams mostly played in empty American football stadiums. From 2002, MLS has expanded to 22 teams and the owners of built soccer-specific stadiums. MLS secured national TV contracts and now the league is profitable.

MLS is a single entity league in which each team is owned and controlled by the league’s investors, instead of operating as an association of independently owned teams. The investor-operators of MLS control their teams as owners control teams in other leagues. The investor-operators of MLS are commonly known as team’s owners. The MLS has a fixed membership like other sports leagues in the United States and Canada. The headquarters of MLS are located in New York City. The MLS doesn’t use the promotion and relegation practice.

In the middle of the season, MLS teams break for the annual All-Star Game, this is a friendly match between the league’s finest players and a major club form different league. At the end of the MLS season, the team with highest points is awarded the Supporters’ Shield. Similar to other leagues in America, MLS regular season is followed by 12-team MLS cup playoffs in November, ending with MLS Cup Championship final in early December.

The spring-to-fall schedule of MLS conflicts with FIFA calendar and with summer time international tournaments like Gold Cup and World Cup. This causes several players to miss some MLS matches.

As MLS is divided into 2 conferences eastern and western conference. The teams are listed below based on the conference.

In 1996 MLS began their first play with 10 teams. On April 6, 1996 the first game of MLS was held and the San Jose Clash defeated D.C. United. MLS had generated some buzz by managing to runaway some marquee players form 1994 World Cup to play in MLS including some U.S. stars such as Alexi Lalas, Tony Meola and Eric Wynalda, and foreign players such as Jorge Campos, and Carlos Valderrama. The team D.C.United won MLS cup for three times in first 4 seasons.

During the first 5 years of MLS it has lost an estimated $250 millions and lost $350 millions between its founding and 2004. In August 1999 these financial problems of MLS are taken to Commissioner Doug Logan. On January 2002 MLS announced that it decided to contract the Tampa Bay Mutiny and Miami Fusion leaving the MLS league with 10 teams. 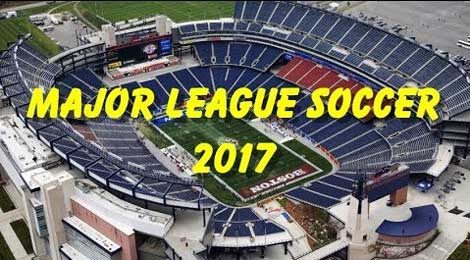 So, these are the stadiums of Major League Soccer Eastern and Western Conferences teams.

Major League Soccer follows the rules and standards of the International Football Association Board (IFAB). The playoff extra time structure follows standards of IFAB: two full 15-minute periods, and followed by a penalty shootout if necessary. The away goals apply to the playoff stage of the competition, but do not apply to overtime in the second leg of any two-legged playoff series.

U.S. Soccer recruited the first full-time professional referees in league history in 2007 as part of the league’s “Game First” initiatives. From 2011 season MLS has been implementing fines and suspensions for diving through its Disciplinary Committee. Charles Davies was the first player fined under the new rule and fined $1,000 for intentionally match officials.