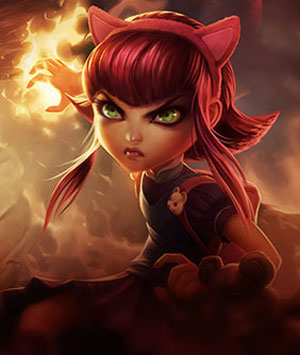 Annie is one of the best league of legends mid champions. Annie realizes a lot of what it is to be a mid laner. For minimal mobility strong crowd control and high burst-magic are the payoffs. But good timing and target selection can swing entire games in Annie’s favour.

The crowd control of Annie makes her very good at starting team fights. If you once used four spells, then you will have charged up a stun that activates on the next damaging spell you cast. This means that you can use Disintegrate or Incinerate to stun enemies, and then immediately drop Tibbers on them, starting the fight with a huge amount of burst damage. Annie’s long range and high CC make her good at starting fights, but be careful if she gets caught out she only has her Molten Shield to protect her, and no real means to escape.

To get the most out of Annie’s damage, you need to build as much Ability Power (AP) as possible. To build this you have to pick up Rabadon’s Deathcap, and this gives you lots of AP by itself, but then also increases your total AP by 30%. You can also build items like Luden’s Echo, for extra burst and splash damage, or void staff to counteract. 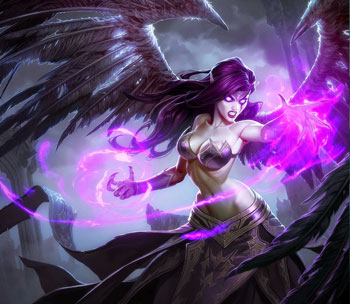 Morgana is one of the best league of legends mid champions. Morgana is a utility mage. Morgan’s appeal is that she has a few extra tools at her disposal that make her great for the mid lane. It’s part of why she’s a viable support champion, but due to her high magic damage, for this list we’re classing her in the role she was initially released in.

The key to Morgana are good aim and quick reflexes. You will need to hit enemies with her dark binding in order to get the most of her kit, and quickly following up with Tormented Si=oil to maximize the damage you deal. You will also needs to make sure you react quickly when your allies are in danger, rooting enemies with your Q, or shielding allies with Black Shield tokeep them safe.

The items like Zhonya’s Hourglass and Hextech Protobelt can be used effectively with Morgana’s ult. The Probelt dashes you forward a short distance, and get you within a range of your enemies while also dealing a little bonus damage. Once you have cast your ultimate, you will want to activate Zhonya’s, freezing you in place for 2.5 seconds. During the freeze time, you can’t move but you also can’t take damage. So, you are safe even if you are right in the middle of the enemy team.

You have to trust your team. Morgana works best when she’s with friends who can capitalize on her long stuns, and also back her up when she engages. Make sure you communicate well before committing with your ultimate because you don’t want to be surrounded by enemies when the stuns wear off.