Caitlyn – The Sheriff of Piltover 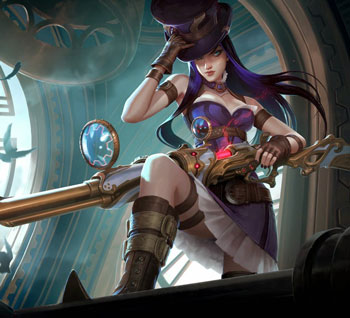 Caitlyn is one of the best League of Legends AD Carry Champions. Caitlyn is the champion with the longest range in the game for the most part. Caitlyn can be exceeding by Tristana and kindred, but that’s not until very late into the game, so most of the time she can deal damage even when she is a long way away from potential threats. Caitlyn has a reasonably simple kit, and relays on her auto-attacks to do the most damage.

ADCs need to stay as far away from the fight as they can. Hopefully, your team-mates will protect you, but you are the high-profile target on your team, and getting too close to the fight is a great way to die very quickly. As Caitlyn, use your W, E and extremely long range to stay out of trouble while still outputting a lot of damage.

The range of Caitlyn is also used for sieging. This is what happens before fights start, when teams are waiting under towers for somebody to get caught out. Caitlyn can use traps to act as improvised defenses, but can also use her Q to deal damage to enemy champions and clear waves of minions.

AD Carry builds are possibly the least diverse in the entire game, with many items working across the board. For Caitlyn, along with many others, you want attack damage (AD) and attack speed, in order to deal the most damage per second (DPS). This means that you want to build Infinity Edge, which comes with lots of AD, as well as the chance to deal a critical hit. These are powerful attacks that normally deal double damage, but Infinity Edge bumps that damage up to deal 2.5 times as much damage as normal. You also want to build Runaan’s Hurricane, which spawn up to extra damage-dealing bolts, to enhance Caitlyn’s DPS even further.

Ashe is one of the best League of Legends AD Carry Champions.Ashe is a utility ADC. A combination of CC, vision, and AoE spells make her a rarity in the bottom lane, and her ultimate is o ne of the most powerful stuns in the game.

ADCs are often a similar bunch, and while there are few- like Jhin or Lucian, who do a lot of spell-based damage, many simply want to auto-attack as much as possible. That means Ashe also needs to hang towards the back of the fight.

You can also use your W to poke enemies and clear minions, and you can fire your ultimate. This impressive ability shoots all the way across the map, but stops when it hits its first enemy target, stunning them and offering your team someone to engage on. While Ashe is good for stating fights, it is also good at finishing them. Don’t be afraid to fire it point blank at an enemy, allowing you to finish them off while they are stunned.

Ashe should also probably be building Infinity Edge and Runaan’s Hurricane, but now I want to focus on 2 different types of item. You will want Lifesteal, which heals you based on the amount of damage you do, and which you can get from The BloodThrister. ADCs are also important for dealing damage to tanks, so items that shred armor with more health than you are very important. Lord Dominik’s Regard is a very useful item on any ADC as, helpfully, it does both of those things.

This is all about League of Legends AD Carry Champions. If you have any queries regarding this post, please do comment below, we will reach as soon as. Stay coonects for recent updates. Thank you for watching our site @ leagueteamupdates.com